We were pretty institutionalized ourselves 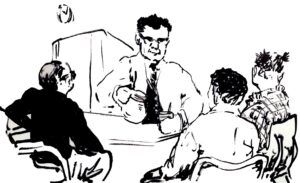 But few practitioners with whom I spoke were nostalgic about the institutions that they had left behind. For many, the chance to work in the community and away from the old mental hospitals afforded them the opportunity for the first time to look critically at how that system produced institutionalization and chronicity. Significantly, both of these conditions were attributed by a number of former institutional workers, not just to in-patients but also to institutional staff, and even to themselves.

The clients, they had less problem with change; it was the older staff, myself included.  I guess we were pretty institutionalized ourselves.  I just couldn’t understand some of that back then the way I do now.

Lots of the old guys had become chronic themselves; they couldn’t adapt; some couldn’t even understand that it might be OK for patients to pour their own coffee.

I had to be de‑institutionalized myself.  I was stale and in a rut, so I left and sold insurance for a few years.  When I came back, it was to the Saskatoon Mental Health Clinic…  I’m not sure I could have gone back to the mental hospital or I would have wound-up like the old guys there.

The staff in the big hospitals really became chronic themselves.  A person really burned-out and lost perspective.